When my mom passed away in January, none of us were surprised. She was 97 and had gone from fairly capable to bedridden in less than 3 months. In some respects, it was a relief to let her go after watching her struggle to sit up, swallow or catch her breath. She had long since outlived her skin. But, when I got that phone call, I knew I faced a major challenge in accepting that she had left this earth. I took the following week, time I had reserved to be with her in Florida, to paint full time, all technology turned off. 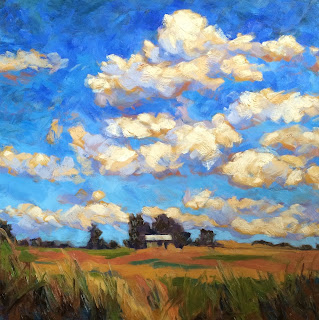 What happens to one person's energy when they die? I decided that studying the sky was the closest I could get to the place where that energy passes from the physical body to whatever-happens-next. I have always loved depicting clouds, so I began to paint them in earnest.

The first painting was very bright, the colors highly saturated. I listened to my gut and left them strong. This was forceful stuff - trying to capture the life/death transition. 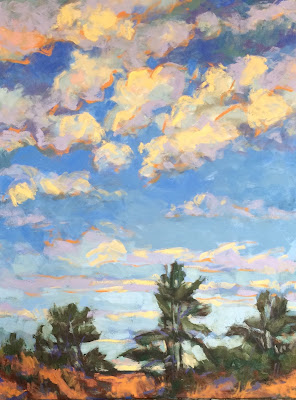 The second painting flowed out in a liquid fashion. I played with fanciful lines in yummy colors. Who would paint this, if not me? Mom's energy was in the room. 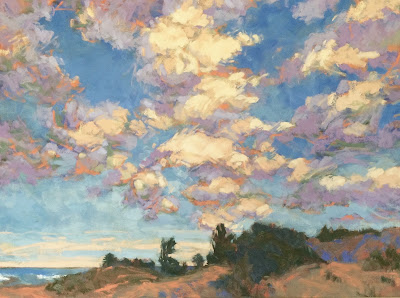 Big Sky #3, as I began calling these pieces, took much time and many layers to resolve itself. I continued to search for the interaction between life and death.  I decided that it may very well exist outside of time. I let the brush do its own thing, holding it loosely by its farthest end and listening with my body for possibilities. 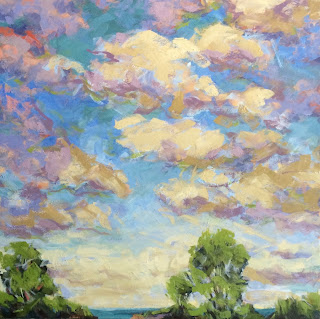 Big Sky #4 went through many stages. Its large, square shape rattled my attempts at natural balance. I felt unconnected and stuck. 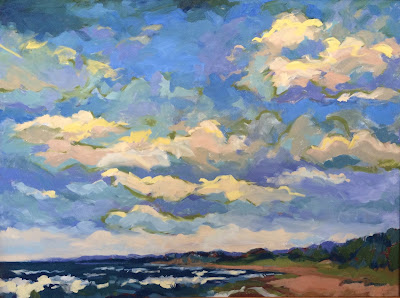 And then Big Sky #5 birthed itself. I could feel power circling my body. The act of painting made me laugh. I was so tuned in to translating the movement of clouds and water that I lost verbal thought. This is a very fine place for an artist to be. I felt joyous. 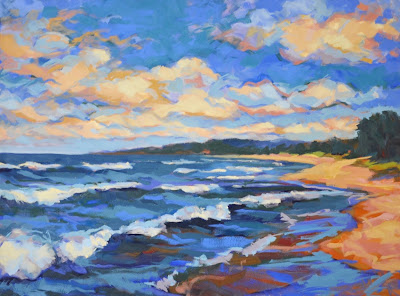 Later, in #6, the dialogue between water and sky happened on its own. I felt the universe as one big, moving organism. Communication between elements became seamless. Life itself tingled in my middle and radiated out my arm.

Currently, another Big Sky painting is on my easel. I may be nearing the end of poking at this unknowable phenomenon, but I am still curious. Time will tell.
Posted by Anne Corlett at 3:51 AM 4 comments: