Ah, so the mission is easy. That is, easy to define: a painting, a great and glorious oil painting!
I accept.

Now, with one week under my belt, I am starting to understand the magnitude of what I have taken on.  I have asked something of myself which I cannot fully envision. This is not unusual for me when starting a painting. But, the longer I am here, the more I realize the sheer number of permutations that exist on this magnificent Pacific Coast. Every direction is teaming with possibilities.

Take the jagged cliffs, for example. The sun moving across the facets makes new patterns continually. They read like hieroglyphics. At one point the rocks on the edge are a huge bird; later, they are a woman, looking out to sea. I understand that years of contemplation might only afford me a glimmer of their truth. But I love trying. I grasp at the shapes with pencil, pen or charcoal. I flush them in with watercolor or pastel. 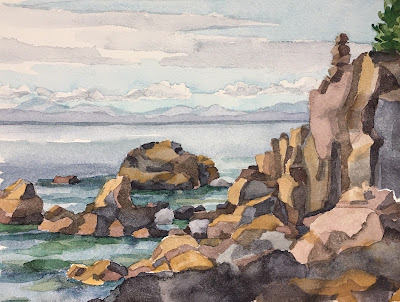 The ocean has its own vocabulary as well, far beyond what one can pick up in a two-week stay. She growls as she slaps and digs at the rock walls with a heavy thump, thump. Or, she whispers while gliding in softly, little bubbles popping, a gentle whoosh as she wraps her arms around each boulder. 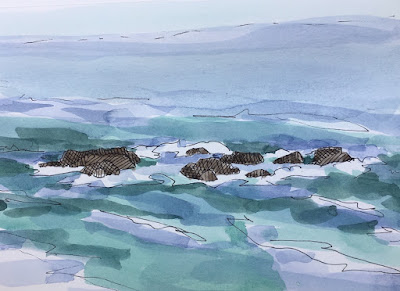 No question that I am enjoying myself immensely. The challenge of capturing a quintessential portrait of this area only fires up my (already continuous) desire to make art. But the luxury of abundant time, without other commitments, allows me to experience this place slowly, using every sense. I am calmed by the ocean's song and happy to suck in big lungfuls of her salty scent. I am honored by the resident eagle, who deigns to land in the tree out my window, surveying his vast territory. As the daylight fades, I am content to snuggle into a soft blanket on the couch with a good book and a cup of hot tea. And, I am hopeful that the answers to my mission will come to me, unbidden, as I work. 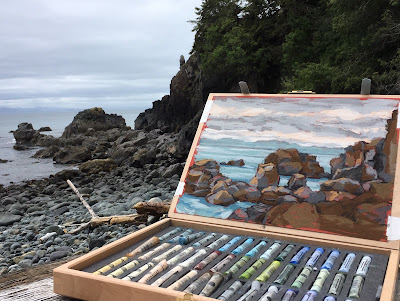 Posted by Anne Corlett at 5:32 PM No comments:

Ok, so I feel like I'm in the middle of someone else's novel. Is this real? I look out the window, across the Strait of Juan de Fuca, and contemplate the Olympic Peninsula. Perhaps I should start at the beginning.

Last year, some delightful folks from Canada asked if I wanted to travel to Vancouver Island to paint the view from their beloved cottage. Why, yes! We put the plans into motion in January and here I am. I flew into Vancouver and spent two days exploring. It is a clean and polite city. There are fountains everywhere and waves of rhododendrons in full bloom. After my short stay, I caught a bus that took me onto the BC Ferry, then all the way to Victoria, where I rented a car. The ferry was magnificent - huge, shiny and new - and, after walking around the perimeter of the boat, I settled on the bow and drew the tufts of land that announce Vancouver Island's approach. 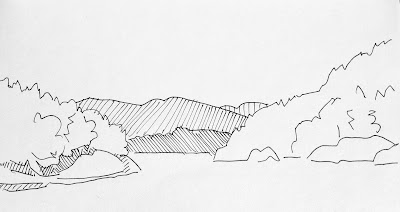 After spending one night with this delightful family in their little piece of heaven, I took off for Tofino, a small surfing town at the end of a peninsula that looks like an arm bending into the Pacific Ocean. It was a long drive, up the east side of the island and across the middle. Once into the mountains, I was reminded of Alaska, where around a turn you are likely to see green foothills ending  in big, placid lakes. Tofino crawls up a hillside in the Pacific Rim National Park Preserve, with a small city-center on the water. I walked out the door of my Airbnb a bit dazed; all these new perspectives were begging me to record them! 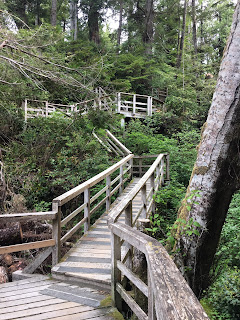 Luckily, part of me understood that it was time to slow down and experience, instead of seeing everything as a potential painting. (This is harder than you'd think!) I hiked a trail through a rainforest where the trees were large and old, with crooked limbs that reached around, covered in moss. I thought maybe when I turned my head one might stretch out and tap my shoulder. Ahhh - so much wisdom buried within!

The beach at the end of the path was massive, encircled with craggy rock walls. I relaxed on a giant piece of driftwood and did some simple drawings and watercolors. 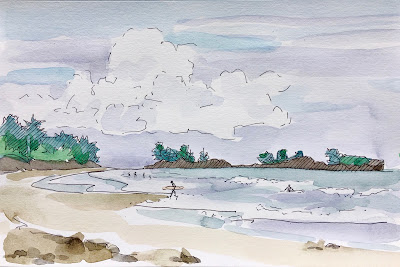 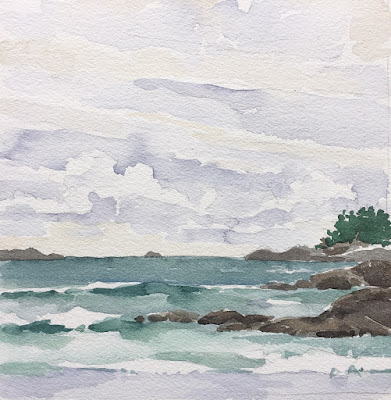 And now I am back near Sooke, around the southern tip of Vancouver Island, in a cozy cottage overlooking a jaw-dropping view. I have a lot to discover in the two weeks ahead of me, not least of which is how to turn off the "to-do" list in my head and open myself up to the breath of the skies and the heartbeat of the ocean.