Alaska, the 2nd half

Alaska was: gentle, kind, rugged, wet, foreign and yet familiar. The smell of pines took hold of my nose the moment we stepped through the airport doors. Mountains ringed us wherever we went. The drive from Anchorage to Soaring Eagle Lodge was stupendous; we snaked between mountain ranges and along rivers the color of turquoise. Cotton clouds clung to distant volcanoes. I could hardly remain calm as I looked at all the unique beauty, waiting to be painted.

The second half of our week mirrored the first in its adventure content. Traveling with Allen is not like traveling alone. I feel safe, for one thing. And I do stuff I might not otherwise. Like ocean fishing. We boarded a 30' aluminum boat as the sun rose. It held 6 of us comfortably, that is - until we slammed through the waves to get out into open waters. Captain Mike was a grouch! It didn't help that I had never fished in my life, much less for halibut. He swore under his breath when I asked for a lifejacket demonstration. (Well, they could have been different than those we use on Lake Michigan!)

Actually fishing, however, was exhilarating. We put 3 pound weights on the line to hold it near the bottom and drifted. The captain twisted octopus around the fish bait in order to keep it on. Reeling one up - holding the pole in one hand and turning the crank with the other - was difficult, to say the least. My noodle-strength arms really let me down. Eventually, Mike showed me how to put the pole in the rod-holder on the side of the boat. Maybe he was not such a bad guy after all. Once  the fish flopped on the deck - so odd looking, like a Picasso painting, with its side also its top, two eyes in asymmetrical balance - I closed mine rather than watch the captain club it. In the end, we all caught our limit. Allen and I flew home with almost 70 lbs of fish! Entertaining is definately in our future. 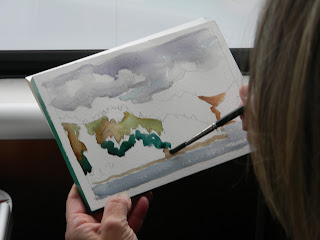 On our last full day there, we took a National Parks Fjords Cruise out of Seward. I was positive that it would be cancelled because the seas had been too high to go the day before. My heart soared as we boarded. I wanted to see glaciers up close and personal. We claimed half of a table on the port side, top deck, and I immediately set up watercolors. The captain stopped and circled areas where there were whales in a cove and then sea lions lazing in the sun, an eagle perched high atop a grassy rock, otters twirling in the water. Her slowed pace allowed me time to do simple pencil sketches and then watercolor them. I was in heaven. 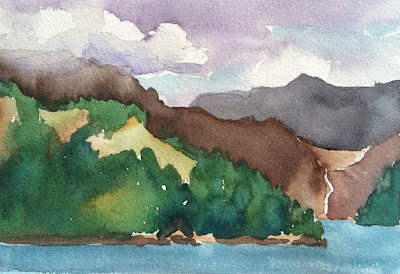 That evening we returned to the cabin for the last time. We ate and drank well, preparing for a good night's sleep prior to a red-eye. The next morning when I opened the curtains, I could hardly believe what I saw. Mount Iliamna was out in all her glory - one giant white shape against a clear morning sky. Wow! Up until then, the volcano had been mostly hidden in clouds and hardly available to paint. But here she was - real and magnificent! I glanced at the time, looked over my shoulder at Allen, then whipped out my watercolors. I was takin her down! woo hoo! In less than 10 minutes I recorded the basic essence, a powerful presence, revealing herself at last. Ah! 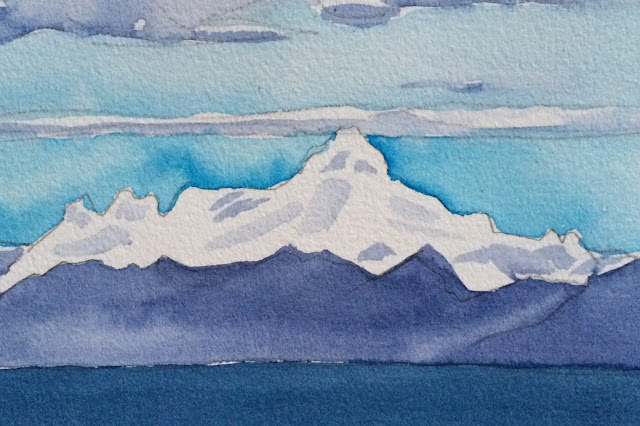 Now I am home and Alaska feels like a long time ago (though less than a week). This trip was unlike any other; it was a true luxury to spend time getting to know the "last frontier" (even just a teeny bit)! And now, I have only two states left to paint. Part of me is thrilled to be almost done. The rest of me will be sorry when "Easel on Down the Road" is over.