Easel on Down the Road - Kentucky, again

Last night I stayed in the lodge at Barren River Lake State Park in Kentucky. I got there in the dark, a full hour later than expected (thank you 5-year-old GPS). I was tired and therefore elated to find they had a restaurant from which I could order take-out. Ahhhh. Life is good when you can take a hot shower, watch MSNBC and eat a Cuban sandwich in your pj's!

This morning at breakfast I asked the hostess and waitress where I should paint. What was quintessential about their state? (Last April Angela, my best-friend-painting-girl, and I traveled through Kentucky and I painted a 16x20 of a lake with a tree in front. I don't like that painting, it does not represent the state to me and it is the wrong size.) From these women I heard about a goat farm, horse ranches and a cheese-making enterprise that also sells wine. The easiest destination was right in the park - the barn that houses horses. Perfect!

I set up by 10:30 (time zones be damned - I'm living on EST) and knocked down at 3. Some people walked by and many vehicles zoomed past but only one man stopped, got out of his truck and strolled over to take a look. He was cheerful and young, with a long, shiny ponytail. He worked at the park, knew every inch of it and loved it dearly. He asked a few questions about what I was doing then launched into a detailed account of catching catfish with his bare hands. He would dive under water and nudge them gently with a pole while they were in a cave. He would block the entrance, entice them out and catch them. The largest he caught was over 70 pounds. He has enough in his freezer to eat catfish every day of the week for a year and he generously offered to tell his wife to bring me some (he was on his way to work). I declined, imagining driving back to Michigan as they thawed for two days in my car.

So, that is my Kentucky experience. Like Tennessee, it is a very Southern state. This afternoon, crossing the Ohio River in Louisville felt like moving into home territory. The traffic was fast and heavy but I did see beautiful, big bridges on either side of me spanning the huge waterway, gleaming buildings lining the shores. And then I was home - the Midwest. Now I am at a friend's house not far from Bloomington, Indiana. She and her son and, coincidentally, Angela's daughter (who is living here while she gets her doctorate at IU) have welcomed me with great conversation, Thai food and a comfortable bed. I cannot wait to see my surroundings in the daylight and pick a site from which to paint. 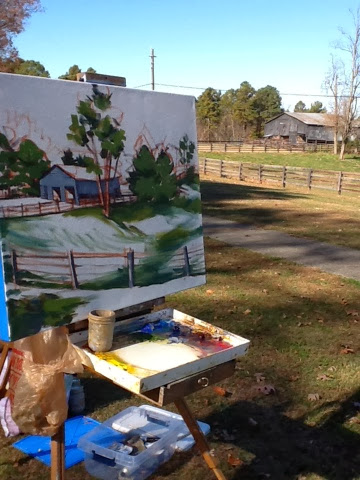