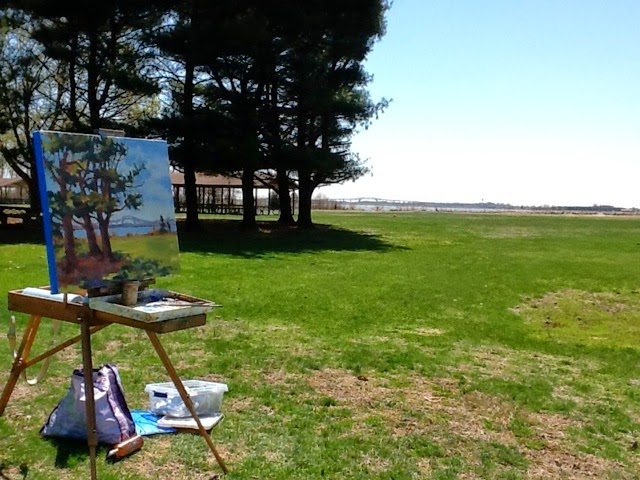 Today I painted in New Jersey. It was 34 degrees when I got in my car and the oil ight went on. This is what boyfriends are for - they tell you to change the oil when you don't want to take the time because otherwise the engine will blow up. (He did not say exactly that but I have seized an engine before so I know it can happen.) I googled Jiffy Lube and found one nearby, so that is where I had my morning's bad coffee. I then headed across the Delaware Memorial Bridge into NJ.
My plan was to find a site soon so that I could make tracks on the road home after painting. I turned south and drove along the Delaware Bay. My first stop was a city park in Pennsville. I had hopes of a view of the bridge I'd just crossed. Wouldn't it be appropriate to paint a bridge in the state which had recently suffered from "Bridgegate"? The park was huge; the grass stretched a long way to the water and the wind bit at my cheeks and hands. I clearly did not have enough energy to paint there.
I returned to my car and continued south. Next came Fort Mott. I pulled in and was initially discouraged. The land was flat, without ornament other than the hills which held gun "emplacements", built after the Civil War. I climbed the old stone steps and scanned the horizon. A distant bridge!
I set up near some pines and my anxiety dissipated as I roughed in the composition. It's as if my heart rate slows when I paint. The world around me pulls away and I enter a wonderful, timeless zone. After several hours I was satisfied that the painting had a healthy beginning. It was only 2:30 and I pressed "home" on my GPS with a light heart.
I'm spending the night in a noisy Motel 6 off of Highway 76. I found a tavern with lots of cars parked out front; I ordered flatbread with grilled shrimp and a Yuengling draft. I will hit the road early tomorrow, looking forward to my return.
Posted by Anne Corlett at 5:13 PM