Easel on Down the Road - Painting in Pennsylvania

Thursday evening I arrived near the western border of PA with grape leaves from Byblos in Toledo, the best Lebanese restaurant EVER. I was trying to save them until I stopped for the night so I called Peter and had a great conversation, which brought me there with dinner in tact. "Americas Best Value Inn" was inexpensive, with small, clean rooms that felt European in their creative use of space. When I woke the next morning, it was raining.
I had picked out Moraine State Park in which to paint, as it is only an hour from my college friends' home, my bed for the night. The Weather Channel said it would rain till early afternoon, so I took my time driving there, stopping for breakfast along the way. At the park the rangers were extremely friendly. They earnestly thought up sheltered places with a view. I accepted their map and drove along the North Shore of Lake Arthur.
The trees were still naked and, while the lake was vast and certainly beautiful on the right day, nothing caught my eye. I felt uninspired. A man who works in the park sat down to eat his lunch in the pavilion where I was sketching. He was friendly. He offered me carrots. I decided then to drive to McConnells Mill at a tangential state park. I knew it had no protected place from which to paint but the rangers had attested to its beauty so I decided to chance continued precipitation. It was getting late in the afternoon to start a painting, almost 2:00. I began to worry that my best energy was ebbing.
The road to the site was steep and lined with rocks that rose up close and high above my car. The river roared past an old mill and under a covered bridge. Right away I knew I would stay. This was a magical place.
As I walked around, the drizzle lightened. I set up on the bank, facing upriver between some pines. The view was a bit daunting; the red bridge created a huge rectangle which threatened to take over the composition. But time was running out. I did not want to miss dinner with my friends. I had no choice but to focus and draw. 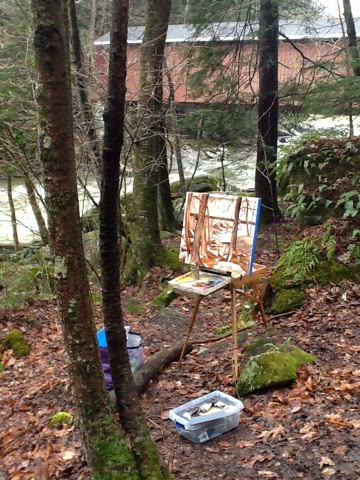 As I worked, the water's power infused me and I got lost in the recording of shapes, value and color. Several people hiked by. Two kayakers rode by, one flipping over and popping back up repeatedly. I stopped after 2 1/2 hours, satisfied that I had enough information to finish the piece in my studio. 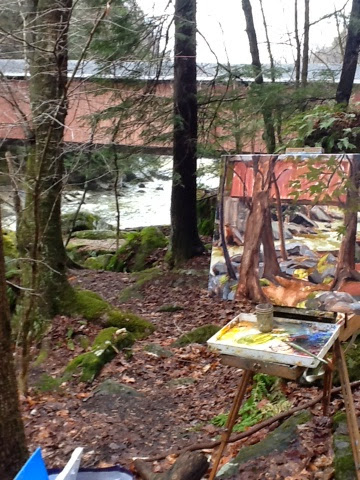 My stay with Julia and Mark was delightful. I had not seen them for 13 years but we did not stop talking until we forced ourselves to go to bed. One of the best perks of this journey is reconnecting with special people from my past.  I am now in Washington DC and will head out this morning to paint in Maryland.
Posted by Anne Corlett at 6:04 AM