Easeling on Down the Road in New York State

I reached Ithaca, New York Monday afternoon. I had taken the "short" route through Canada on Sunday so that I could visit with my nephew, Brendan, and his family on the way. Always industrious and never boring, they were pressing apples into cider when I arrived.

In Ithaca, Sam (brother to Brendan) and his partner were waiting for me in their charming, art-filled home. Sam and I went hiking to scout for painting places while Nick graded papers for his class at Cornell. That night we walked down the block to a simple, elegant restaurant where I enjoyed butternut-lime soup and a beet salad.

Tuesday was warm. Sam headed to NYC early and I made thick, press-pot coffee. After a fruitful discussion with Nick over peanut butter toast, I jumped into the Fit and drove just 12 minutes to the Robert Treman State Park. The lower trail led along steep, stoney cliffs and I gasped when I rounded the corner to see a man-made bridge high above rushing water, neatly fitted into the vertical shims of rock. I set up quickly, intending to paint this unique dialogue. It was hardly 10 am and the only other people there were masons, repairing the rock path.

My heart was racing. The water below was loud and the sound pounded through my veins. This was a difficult view. All of the colors were in the same family! I squinted to find the differences in value. I sketched the big shapes, then washed the darks in with a thin, warm grey. It looked good at this point - like a big, loose watercolor - and I felt the urge to stop. (Maybe this was the best it could be!) I continued. 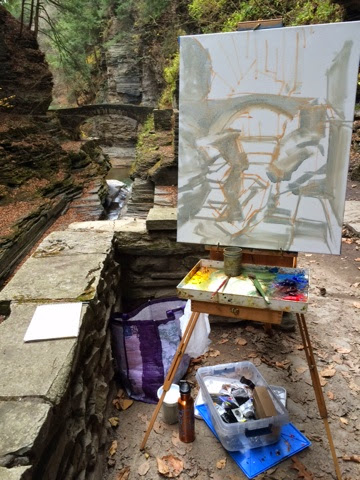 As I worked, I relaxed. The magic soaked in. This was a home to fairies, wood creatures, elfin beings. I filled my lungs with the turbulent air. Those negative ions - so much energy! Some people passed, their gate muffled by the river, cameras slung over their shoulders. One photographer took several pictures of me working (and generously emailed them to me later). Others paused to smile and note my progress.

By 1:00 (my intended departure time), I was deep into defining the darker details. I slowly scraped the palette  at 1:30, cognizant of the long drive ahead. 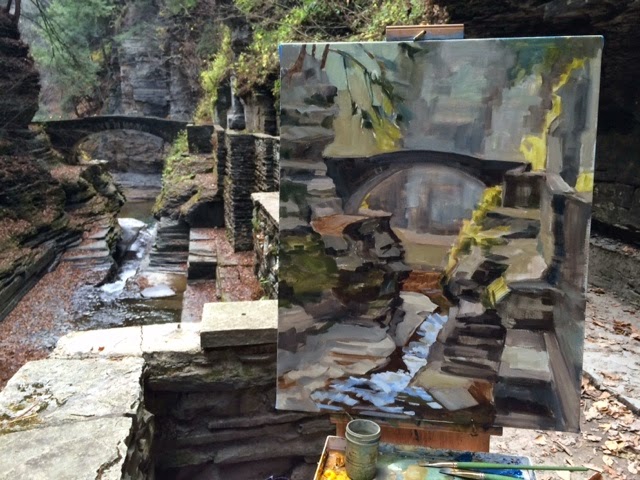 One of the masons was watching me. We chatted as I packed up. During the basketball season he plays exhibition games for the team that opposes the Harlem Globetrotters. What a job! He was looking forward to an upcoming event in Japan. He cheerfully offered to help carry the cart loaded with easel, supplies and the wet painting. This was a very welcome kindness, as the uneven path back to my car included several sets of stairs. 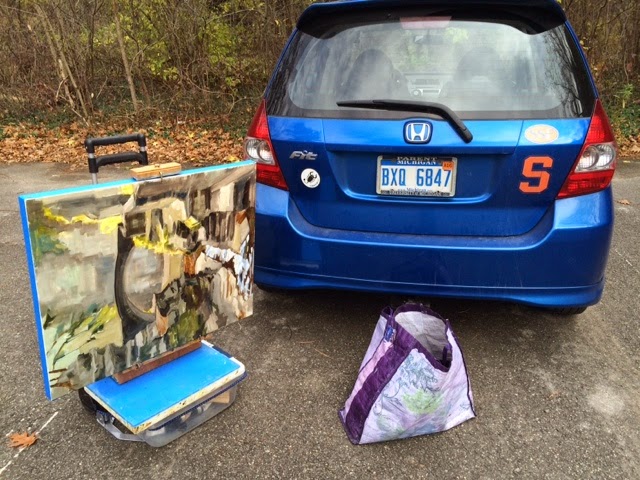 "Easel on Down the Road" has afforded me all kinds of personal perks. I spend time with family and friends in their own homes, a luxury to savor later. I meet people who are interesting and unique, with their own stories to unfold. And, I am often the recipient of unexpected generosity from strangers. Life does not get much better than this!
Posted by Anne Corlett at 6:50 PM