I know Ohio. I have driven across the top and down the middle many, many times. I have bicycled hundreds of miles along the Sciota River. When I think of an Ohio landscape I see a white barn with its bald silo planted in the flat green expanse. I see an old farmhouse set in a pocket of trees, hugging a golden field.

And so, I decided to paint an urban landscape. Last month, driving home from New England on 90, I was pleasantly surprised by the sweep of the highway along Lake Erie, Cleveland's downtown deceptively touchable. I had not painted a skyline since I lived in Chicago 30 years ago and it was about time.

I found a small park on the lake just east of downtown. It was next to a marina and enjoyed by local fishermen and others who want to contemplate the lake's horizon. I got there by 11:00 and strolled around, looking for the most interesting view of the city. I set up with the docks underlining a cluster of buildings.The clouds sailed in and my composition was complete! 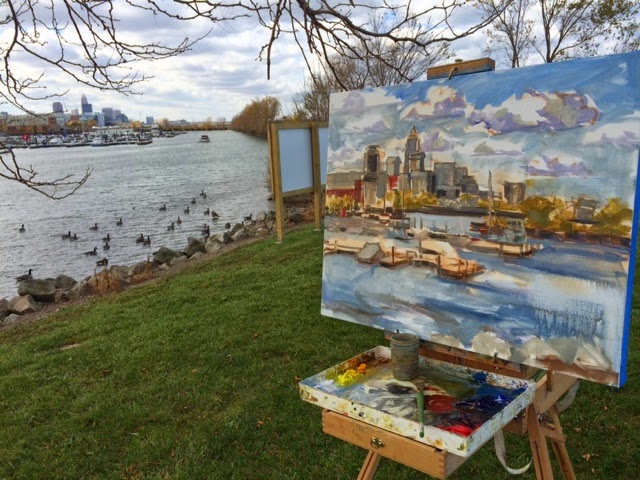 I had good energy but it was cold and the wind built as the clouds massed. I felt uncomfortable with my surroundings. Was this a dangerous place for a woman alone? I didn't think so but I couldn't be sure. Drawing the skyline took exacting attention which I could not muster. I outlined the shapes and filled in color with shivery strokes. Several men stopped to talk or take pictures. They were pleasant enough. But slowly I became so distracted that I stopped looking - death to a plein air! After 90 minutes, I packed up and headed to the Cleveland Museum of Art. If I couldn't make a good painting, I could certainly learn from others.

I put an hour on the street meter, just the right amount of time to dance through the Modern Galleries before the long drive home. I love to go to a museum alone. I sweep from painting to painting and only stop when one grabs me. I am always on the lookout for a Matisse or Van Gogh that I've never seen. I was rewarded by one of each. But what really arrested me was a female nude by Gauguin. "In the Waves" was simple and abstract, the woman diagonal across the canvas, surrounded by a rather raw green. Curls of white wave-caps connected her to the edges. It took my breath away!

And so, this Ohio experience was complete. I headed home, planning on finishing Cleveland in the peacefulness of my own studio.