California was not what I expected

I have been to California before. The drive up Highway 1 is exceptionally beautiful and I have yearned to paint those vistas. Family and friends - old and new - offered places to stay. But, in all honesty, it was easier to cut across the top of the state in this month-long journey than to go even as far south as Napa Valley. I looked for lodging in the upper fifth and found what appeared to be a cabin in the Shasta National Forest. There is more to California than its coast! My drive down the shoreline from Oregon had stunning views of huge rock formations and I pulled over frequently to do sketches and take pictures. Then Highway 101 went right through the Prairie Creek Redwoods State Park and the giant trees rose straight up to the sun on either side of the winding road. Wow.

Just north of Eureka I turned on highway 299 and took the Trinity Scenic Byway east, into the mountains. My heart was light - I was really looking forward to two days of painting in a cabin in the crisp mountain air. At Burnt Ranch I turned on Underwood Mountain Road. The uphill climb was steep and quite narrow. It made endless turns, with rocks spilling across in places. I thought it could never support the passing of two cars. Occasionally, the view opened up and mountains folded over themselves into the distance. The longer it took to climb away from civilization, the more concerned I became that if I were to drive off the edge (which appeared entirely possible), no one would know. I was long since out of cell phone range. Luckily, it was plenty light out and I gripped the wheel and continued, trying to remain positive. The 27 mile drive took me over an hour. Finally, I started descending and soon a gate appeared, and then a house and then another. Phew! I pulled into the correct address with great relief. There was a business card thumbtacked to the middle of the front door. I knocked. A dog barked, then a skinny older man with watery eyes answered. "Anne?" he asked with a smile. I had arrived!

I drove my car around back and met him at an open gate. Horses kicked up dust on the other side of the fence. The small house where I was to stay was in the back yard along with several outbuildings in various stages of decay. The sun was strong, even at 6 pm, and I was dismayed to see precious little shade. Inside, the heat hit me like a wall and the mustiness brought up a sneeze. Walter pointed to the air conditioner. I smiled and said thanks. This place was teeny - one room with mismatched twin beds, two folding chairs, a tiny fridge and a small table covered with flowered contact paper. The bathroom was clean and furnished with essential oils and new soap. I understood that these folks had good intentions but right then and there I decided to leave after one night. This "cabin" was not in the woods and I could not imagine returning to it after a sticky day of painting. Luckily, their internet worked and I spent some real money on a hotel for the next night in Redding, CA, about 85 miles away. Until then, I would make do.

Charlie and I crowded into the slender bed. The air conditioner kept us cool enough to sleep and in the morning, I did a quick drawing of the horse corral, then loaded up and left before the heat could penetrate. I was counting on finding a landscape between there and Redding. I took the only way out - that same winding road - and near the end, found a spot to pull over and set up. It was 10 am and already 78 degrees - time to paint! 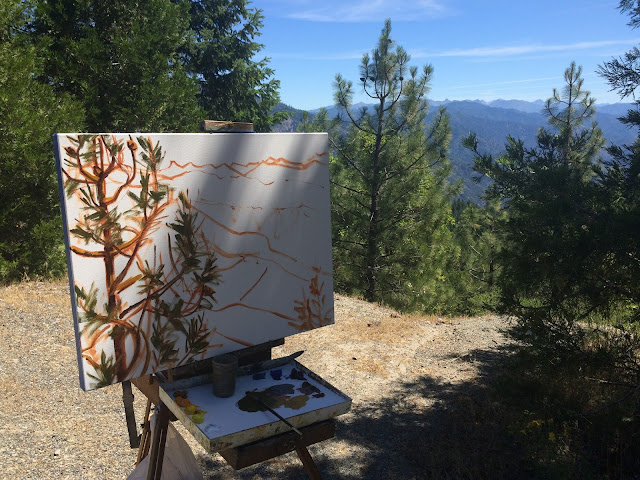 I tucked into a receding chunk of shade and hurried to catch the dramatic lighting on nearby trees. Charlie sniffed around long enough to get a million little sticky buds clinging to his fur, then settled down in the car. The temperature was bearable and there was little wind, plus the mountains held lovely secret shapes. I worked on mixing different shades of blue and purple with which to depict them. Soon, I heard a deer fly; there is no mistaking that buzz. Then several chimed in and I knew I did not have much time before they decided to circle. And so they did! I continued to paint, thinking that I would go until one bit me and - surprisingly - none did. Their "song" was not conducive to focused work, however, and I packed up after two hours. The drawing was good and the colors were a start. I will have to see what I can make of it when I get home.