Nebraska - the Cornhusker State - smack in the middle of the country, the heart of the great plains, boasts Kool Aid as its official soft drink. It is my last state in this, my final extended road trip, and I was prepared to be underwhelmed.

When I crossed the border from Wyoming, the hills stretched into smooth, flat fields. I stopped halfway through the state in Kearney, as I had found a modest house on a quiet street in which to stay. After consulting the map, I visited a park that took up a large green rectangle at the edge of town. Yanney Heritage Park is indeed huge, consisting of 80 acres, born of a cornfield.

A sidewalk runs along its outline, so Charlie and I took a long walk to see what we could see.  A river fans out into a pond and people were paddle-boating around, sharing the water with giant white swans. The lawns were beautifully manicured and we saw a look-out tower, a senior activity center, work out stations and an outdoor amphitheater, where the final dress rehearsal for "Tarzan, the Musical" was being performed. Further along, a wooden bridge spanned the river and the views going both directions were nice, but all along, I thought I would like to paint a giant sky over farmers' fields because that is how I think of this state. And, then, there it was - a red barn tucked into a line of trees - the perfect Nebraska landscape!

The next day was slated to be hot so I got going early. I packed up my art gear on the rolling cart with plenty of bungee cords and set off at a brisk pace. Perfect clouds rose above the farm and I scribbled off a quick sketch and took some photos to catch their transitory path.  The wind was very strong so I left the palette on the ground to mix colors. I almost never mix ahead of time, preferring to react to what I've put on the canvas. But I found it was easy to do so: a light and dark green, a light tan, a medium purple, my favorite aqua blue and a rich dark brown. It turned out that having them ready made the whole process more streamlined. On this, one of my last states, I learned something new! I guess that is beauty of what I do - every situation presents an opportunity for growth. 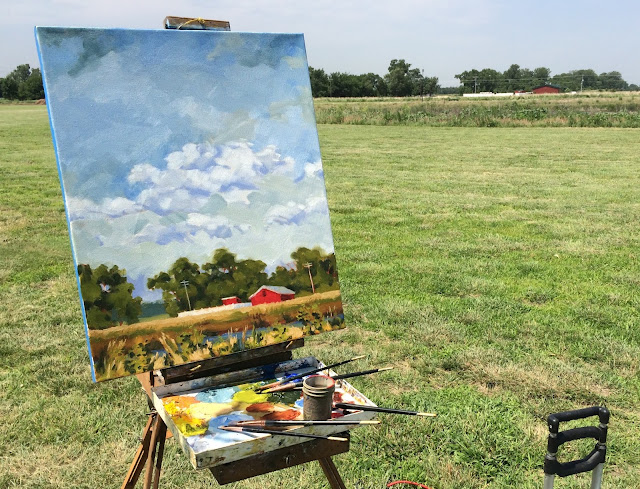 It was a lovely day at the park! I took Charlie off-leash and he was happy to guard me with a few tough barks when strangers stopped to say hello. Though it was hot, the wind kept us cool. All in all, I enjoyed my time in this state. It felt uncomplicated and straight-forward. I am now happier than ever to be returning to Michigan and my home. If anyone (who doesn't already know) wants to guess the three final states, there's a reward in it for you! They will all be done in time for next summer's show at the Saugatuck Center for the Arts. See you there!