For this state I chose where to paint before leaving home. Most of my decisions are last minute but I planned to meet Allen in Kittery, ME that night and Plum Island is close to the northern border of Massachusettes. It is a narrow island with Cape Cod style cottages on the northern end and a long lane down to the Parker River National Wildlife Refuge on the south.The woman at the gate frowned at my trailer and reminded me to park responsibly. I did not argue.

I stopped about halfway to the southern end. Trees blocked my field of vision but I noted bathrooms on the hard gravel path - nice. When I got to the open air, I saw a tower and climbed, trying to decide whether the weight of my supplies was worth the view.  The vistas were, indeed, stupendous. This is marsh on a grand scale, like my river landscape at home but so much bigger. 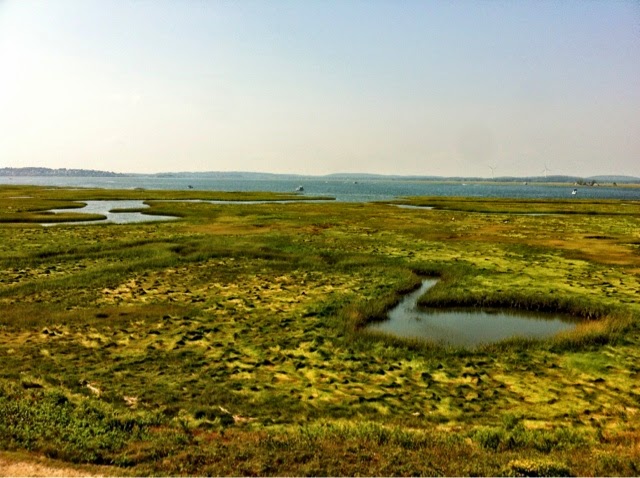 I went to the car for my supply cart and walked slowly back along a dirt track. There were bird watchers everywhere. It was windy. I looked for a good composition while walking. I stopped and set up the easel. I drew in my sketchbook, then moved the easel further down the lane. Finally, I started. I was not in a hurry. It was beautiful! 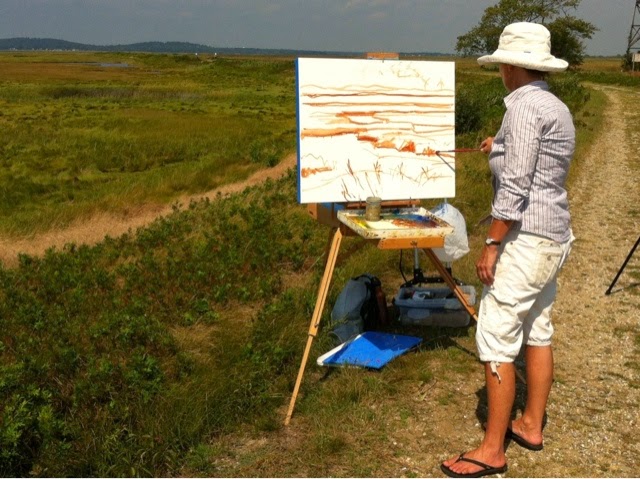 And hot. I had left early on purpose, as rain was predicted. When I passed through Newburyport at 10:15 that morning, a sign said it was 91 degrees. As I stood in the sun, the wind built. I began to work at a faster pace. I carefully set the values down, thinking of my pastel students. I put large light green shapes down for grass; they helped fine-tune the drawing. I laid a saturated blue in the water shapes.

Some people walked right by me, others stopped for a long chat. They were all there to drink in the amazing  wilderness.

By 1:00 the clouds had massed and I was left with only the light colors to fill in. I worked quickly, hearing thunder in the distance. 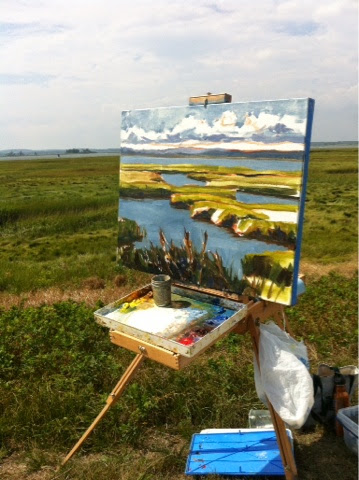 I covered the last of the white canvas and packed up. When I reached my car, the sky was clear but I was ready to sit. It was 1:30 and still very very hot. I turned on the AC, ate an apple with peanut butter and then drove slowly up to Kittery. Allen pulled into the hotel at 3:00, minutes after me. It was a luxury to get a big hug and then take a long shower.