Easel on Down the Road - Colorado

In 1984 I drove through Colorado, going the other direction. That is a different story, but I remember my state of shock and awe at discovering a huge cattle ranch between the 1400' peaks past Aspen. It was like a secret, and one I wanted to find again. I searched Airbnb for a location in the mountains and ended up in a small town near Telluride.

As I drove to Ridgway, I was still in a romantic swoon over Utah, and hence a bit unexcited by the clusters of communities in the flats along the western side of the Rockies. They appeared crowded and uninteresting, even as the mountains shadowed purple to my left. Then, about 20 miles north of my destination, the clutter dropped away and foothills rose in it's place.

White Stone Vacation Rentals includes a huge horse barn (an alpaca lives there too), a log cabin and a small house where I stayed, on the hill above both. Upon arrival, I followed Sandy into the barn to talk while she mucked. The view was stupendous - the San Juan Mountains rose magnificently in the distance, over a checkerboard of horse and cattle pastures. This was pretty close to what I had imagined. Sun shown through the puffy clouds; it was a scene made for painting! But I had been out of the internet's reach for several days and so I went inside and worked on my laptop for the rest of the afternoon. The next day dawned cloudy and cold. Charlie and I went for a walk in the small town. When we returned, the owner and her dog met us outside and she graciously opened the upper level of the barn for me to paint from. Rain was hanging in the air.

I was suddenly bone tired. Whether it was the glass of wine with dinner or the fitful night of sleep, I just did not have the energy to pack up my stuff and wheel it to the barn, close as it was. And, anyway, the garage had a view that included a tree, giving the scene perspective. All I had to do was open my trailer and take stuff out! Perfect.

It was a good time to organize my supplies. They get so disheveled when I'm painting on the run. I poured fresh mineral spirits, cleaned my pallet thoroughly and reloaded it with fresh paint. I eyeballed the scene and began to draw it carefully. I plunked on some colors to alleviate the white of the canvas. Then I went inside and took a nap. Honestly, that's how tired I was. In 20 minutes I got back up, had a fresh cup of coffee and sat on a storage cabinet, looking at the painting. 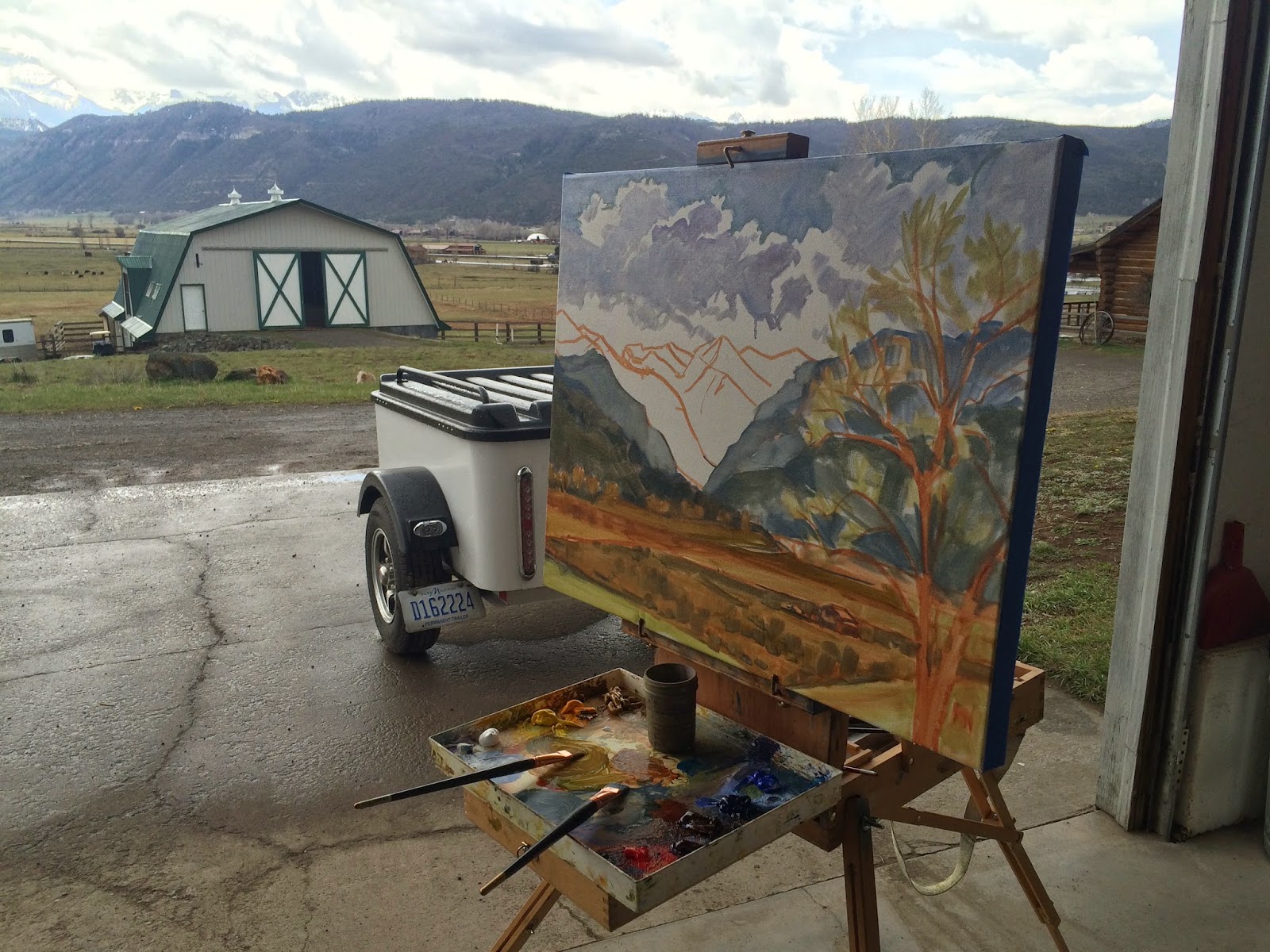 The composition was interesting and I had done a decent job with the foreground. Just the distant peaks were left - a breeze! Think again! The pattern on the mountains was distinct but the colors were so muted. How to distinguish the clouds from the snowy points? I felt out of my league. I fussed with the shapes, all tinted whites, for quite a while, then finally cleaned up. It was 5 and I was hungry.

I went to a pizza place at the edge of town and ordered a pizza to go. While waiting, I plucked up the nerve to try the door on the adjacent "Green Store". (Yes, it's what you think it is.) Locked! Dang. I followed the sound of live music coming from behind the building. The smell of pot hit me like a wall. A handful of people were celebrating 4/20, the very date I was there. If you don't know what that is, don't worry - I didn't either, but it clearly has to do with the freedom to smoke marijuana. I still wanted to see the inside of a legal store, so I got my courage up again and entered the medical dispensary across the courtyard. Inside was just like a physician's waiting room, big comfy chairs with plenty of signs reminding me to have my card ready. Card? Guess this was not to be. Well, I tried! I returned "home", had a beer with the pizza and went to bed early.

The next day I drove more than ten hours to get into Kansas. The route took me over the Rockies on Highway 50. It rose past 11,000' at the Continental Divide where little crystals of snow dazzled around in the sunlight. On the other side, the two-lane followed the Arkansas River for quite a while. Now this was a secret! Spectacular green water rushed along between craggy rocks and grassy banks. I pulled over plenty of times to take pictures and watch people fly-fishing. Gorgeous!

My tour of Colorado has been lovely. And now, the grasslands of Kansas call. Adieu!
Posted by Anne Corlett at 8:31 AM