Missouri - the Final State in the SW Seven

Tonight I get to sleep with the big man. Been awhile. Its not the sex in particular, its the weight of him, the smell. Protection. The road is... exhausting. Part of what takes extra energy is being hyper aware of my surroundings at all times. That aspect is like a tiny current, continuously buzzing in my ear. But now that I am headed home, I feel the relief of the familiar and safe ahead.  So nice!

Missouri is green. Hydrated. The hills started as soon I as crossed the border, rolling with trees - so many trees that you couldn't see past them. Ahhhh. I felt like I was Up North in the summer, hidden cabins on water just off the road. When I went through the first "city" of Lake of the Ozarks, I tasted an East Coast flavor. Eye-stinging color on lots and lots of signs that advertise the best sales, steak, water gear... Over the bridge I could see huge condo buildings with dock after dock. Boat slips everywhere. This is clearly a party destination. Like Saugatuck on steroids.

I checked into a Red Roof Inn. Turns out, I'm one of only 4 or 5 guests here. Despite the blooming Dogwoods, it is off-season. The emptiness feels a little erie but the staff is nice, personable. I decided to stay two nights. It is 8.5 hours home (10, all said and done), which I can do in a day. It is renewing to remain in one place, rather than press onward. Hotels are not ideal but I did find a good BBQ joint kinda close. Plus, Thomas, the man at the front desk, suggested I go to Ha Ha Tonks State Park, so, in the morning, I did. 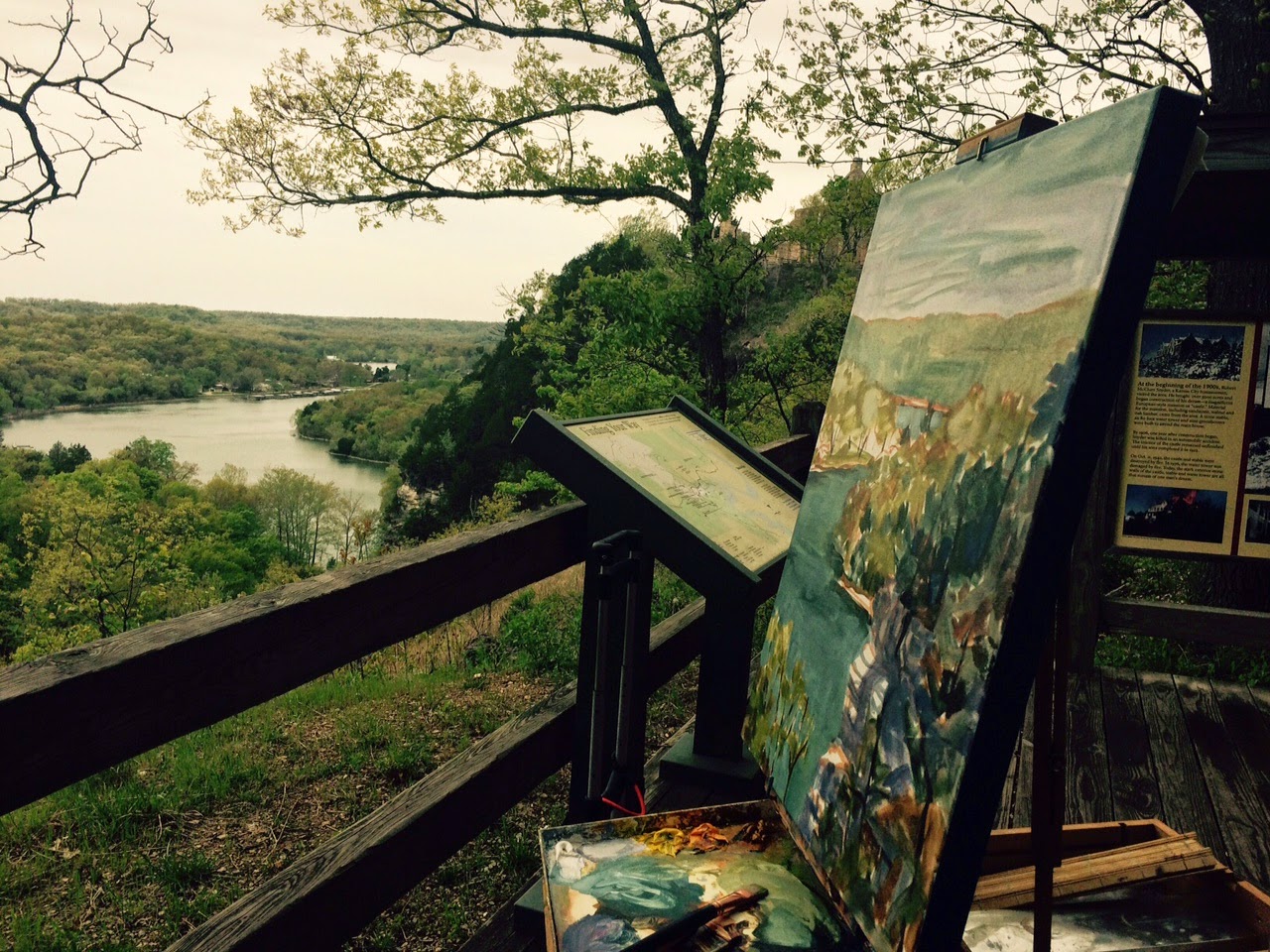 A road wound far up above a lake. It was raining so I took the time to explore the expanse. Charlie and I enjoyed several long walks while the mist continued to hang low and wet. Around noon I settled on a view to paint - a lookout near the ruined 1908 "castle". I drew in pencil in my sketchbook, then checked the radar app. Precipitation for at least another hour. I got in the passenger side of my car, cranked the chair back and played solitaire on my phone. I wasn't going to move - my parking space was perfect and - where would I go, anyway? I haven't played any games while on the road and it took me forever to win one; by then, the rain had stopped. I was finally able to set up! As the weather continued to clear, young couples, families, groups of cousins passed by and almost everyone stopped to look and chat. Missouri has some very friendly residents! I enjoyed the afternoon but, in the end, I had nothing left to give to that painting, the last of seven on this trip. My head is already home. Hopefully, I can pull a decent finished piece out of this beginning. I have my work cut out for me!
Posted by Anne Corlett at 5:53 AM